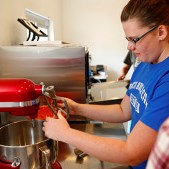 Preparations for the July 28 opening of MOXI Junction are percolating right along.

Pat Leon introduced the kitchen and its equipment to Abigail and Brianna Reimschisel, twins, who will bake for MOXI Junction.

“We love to cook,” said Abigail. “We baked cinnamon rolls and sold them in the neighborhood in middle school through tenth grade. We took pastry, culinary application and culinary arts I and II” while attending Heights High School, where they graduated last spring. Some of the items they’ll make at the coffeehouse will be from family recipes, she said.

While they were getting acquainted with the kitchen, Richie Rathbun was teaching Kara Tully and Laren Kilgore the ropes for making sodas from water, crushed ice and colored flavoring.

After a turn at it, Laren sipped from a glass to taste-test it.

The front door features a large glass panel with a frosted etching of a steaming cup with the word “MOXI” printed on it.

A white fence with thick pickets borders the open-air patio on the south side, enclosing the area to keep children from wandering into the street or into the coffeehouse’s drive-through lane. Benches along the building’s outside wall give parents a place to sit and watch their children play.

“We wanted to make it a place people will want to come,” Joanna said.

Inside, the walls alternate between a powder blue paint and deep yellow. Wood panel flooring has been laid throughout the building.

To the immediate left of the entrance, against large picture windows, a counter with bar stools spans the wall, a strip of electrical outlets running under the counter for customers’ computers and electronic devices.

To the right of the main door, an aisle is lined with two-person tables with chairs positioned against the windows. Aqua-colored trim on the tables matches the seat cushions of the chairs. Opposite the tables stands a large cubbyhole structure with decorative art objects in the pockets.

From the entrance, an aisle leads to the front counter. Another cubbyhole structure serves as the left-side wall. Small tables for two are placed on the other side of the wall, behind the row of bar stools.

At the end of the main aisle is the bakery cabinet that will hold and display the goods baked on site. The register and an espresso machine extend to the left. A soda-making station, coffee machine, sink, baking equipment and oven fill the back counter.

On the right side of the main walkway, a stairway leads upstairs to a meeting room. Each step, 16 in all, is painted with a word that describes the attributes of a person with “MOXI.” Purpose. Extraordinary. Love. Happiness. Faith. Hope. Friendship. Courageous. Just to name a few.

Just past the stairway on the ground level is a blue condiment cabinet with a granite tabletop. A large peg board for hanging art pieces takes up the adjacent wall. Overhead, a strip of lights hangs from the ceiling. Espresso cups and 12- and 20-ounce cups have been repurposed as globes for the light bulbs.

“We tried to think of everything to make it fun. Everything is whimsical and fun,” Joanna said.

The restrooms are decorated with vintage bicycles hanging from the ceiling, and a bike pump acting as one leg of the sink.

The upper level meeting room, also painted powder blue, has provisions for a large wall-mounted TV, tables for six persons, and large windows. It also has several wall outlets to plug into.

Additional training and last-minute touches are all that remain before MOXI Junction’s July 28 opening.

“It’s been three years in the making, and to see it…it’s really fun,” Joanna said.